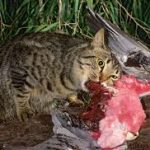 By Tpwwest
Feral cats are destroying Australian wildlife by killing about a million birds every single day, according to a new report. The Compilation and traits of Australian bird species killed by cats’ was initially published in the Biological Conservation’ journal. While it is common knowledge that both domestic and wild cats prey on birds, the numbers in the report are staggering, and many conservationists are now worried that rare and native bird species may be in danger of extinction.

This was the first study to take a comprehensive look at the nationwide impact of feline predation on Australia’s birds. The researchers combined data from more than 100 past studies to come up with their findings. They also tried to figure out what traits made a given bird species more susceptible to predation by both domestic and wild cats.

The bird species that are most affected by feline predation, according to the study, include those that feed and nest on the ground, those that are medium-sized or smaller, and those that live in grasslands, shrubs, woodlands, and islands. The problem is more pronounced in Australian islands and in remote or dry areas, where about 330 birds are killed per square kilometer every year.

The researchers found that about 377 million birds were killed by cats every year, based on data which included the population of the cats, their spatial distribution, and the rate at which they hunt. 316 million birds are killed by feral cats annually, while the remaining 61 million are killed by domestic cats.

Experts agree that cats pose a major problem to the population of birds in Australia and that this is an issue that needs to be tackled more effectively. Australia’s Threatened Species Commission has acknowledged that the evidence presented in the report is extremely important and it is of great concern to them.

This report serves as a reminder that the impact of cats on native Australian wildlife needs to be reduced. Some experts have proposed the use of gene drive technology to reduce the population of feral cats within the coming decade. Currently, there is little that can be done when it comes to curtailing wild cats, but the Threatened Species Commission hopes to come up with a comprehensive solution to the problem pretty soon. The Commission has also urged pet owners to contain their cats rather than letting them roam free because domestic cats also pose a significant threat to native Australian birds.